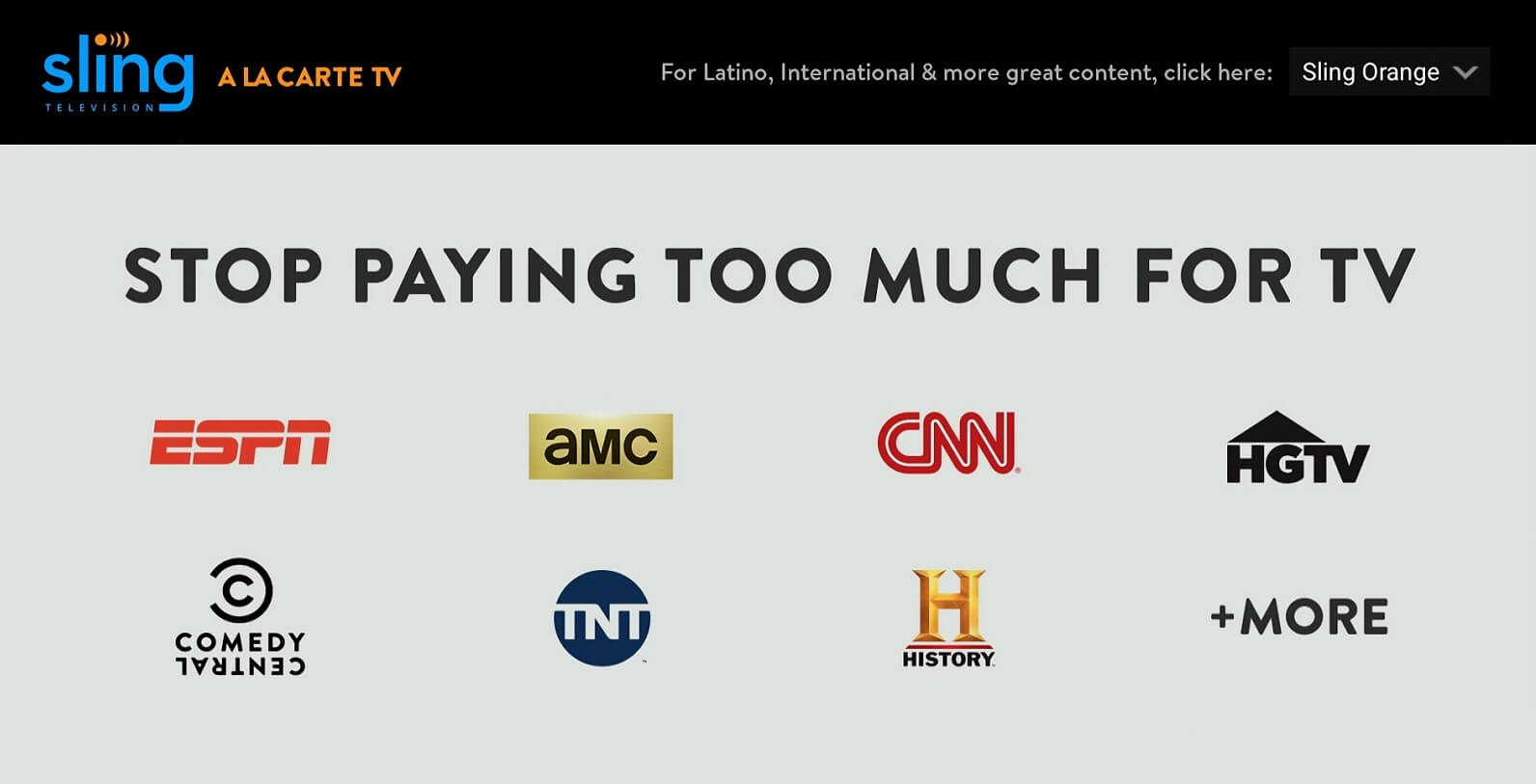 If you are new to cord cutting then Sling TV is one of the best options currently available as it highlights many of the tenets of the cord cutting revolution. It’s affordable, it offers access to a decent number of live TV channels and networks, it’s available on a variety of different devices, and it requires no additional hardware or contracts.

All of this has led to Sling TV boasting a large user-base and becoming one of the leaders in the industry, resulting in a great jumping in point for anyone new to the streaming way of life.

Signing up to a service like Sling TV does however come with a number of decisions that need to be made first. Especially if you want to make sure you are getting the best deal possible and the best package suited to your individual viewing needs.

Here’s everything you need to know about Sling TV, its plans, prices, and device support.

What devices does Sling TV support

Sling TV was one of the first live TV streaming services to come to public attention and so it is no surprise to see it is also one of those that’s very well-supported at the device level.

Pretty much all Android smartphone owners have access to Sling TV through the dedicated Android app available to download from the Google Play Store. Likewise, iPhone users can download the iOS version of the app from the App Store.

At the set-top box level, Sling TV is available in a dedicated app form for Android TV (all devices), as well as for Amazon Fire TV devices, Roku OS devices, and Apple TV. This is in addition to LG TVs running WebOS 3.0 and up and Samsung TVs 2016 and newer.

Additional support is offered through Google’s Chromecast, Microsoft’s Xbox One and Windows 10, and Azulle products.

As to be expected, Sling TV can also be accessed via most devices, including the ones listed above through a web browser.

How much is Sling TV?

Sling TV is one of the most affordable of the live TV streaming options. This has always been one of its major selling points and in spite of the recent influx in competing services, and a 2018 price increase, it still remains one of the best ‘bang for your buck’ options.

Not only is Sling TV a highly affordable solution but it also one of the simplest options as instead of offering a myriad of pricing tiers and plans, as its core it offers two simple options – Sling Orange and Sling Blue.

Sling Orange comes in at $25 per month and for that price you do gain access to a fairly decent selection of channels including AMC, ESPN, CNN, TNT, Comedy Central, HGTV, ID, History Channel, and Lifetime.

Sling Orange also includes access to Disney properties such as the Disney Channel, Disney XD and Disney Junior. This is an important distinction between the Orange and Blue plans.

All in all, Sling Orange offers access to 32 channels for $25 per month.

The difference therefore is the channel lineups. That’s not to say they are completely different as there are a number of channels (AMC, CNN, HGTV, ID, History Channel, Lifetime, and more) that are common to both plans.

Where they do differ is in select entities that might matter to some consumers more than other. For example, unlike Sling Orange, Sling Blue does not come with any Disney content, but does provide access to FOX and NBC channels – not available through Sling Orange.

All in all Sling Blue offers 45 channels for $25 per month.

Okay, while Sling TV technically only offers two packages, due to the unique nature of each package some consumers might find the best option is to subscribe to both. On that note, Sling TV does offer a discount to those who go all-in and so there is technically a third plan option. Instead of paying $25 per month for each of the two packages, users who subscriber to both as a joint single package only pay $40 per month while gaining access to all of the channels available through Sling Orange and Blue.

This is easily the best option for those who do not want to choose between different major networks although that luxury does come at an extra cost and one comparable to other major streaming services negating the main affordable selling point.

One of the more fundamental points which should be noted is the use of simultaneous streams. In other words, in the case where you do need to stream Sling TV on more than one device at the same time, this will affect the decision of which plan to go for.

In spite of costing the same as Sling Blue, Sling Orange only lets you stream on one device/screen at a time. In comparison, Sling Blue permits three simultaneous streams making it the better same-time stream plan.

Those opting for Sling Orange + Blue get the best deal overall with four streams at the same time provided.

One of the downsides with plans as cheap as the Sling Orange and Blue plans is they don’t come with any notable additional features as standard. While this keeps the cost low, it does result in a lesser experience overall.

However, you can add to the experience if you are willing to pay more. This includes the option to record shows and/or upping the channel list.

Cloud DVR: One of the best selling points with a live TV streaming service is the ability to play/pause and record shows and movies without any additional hardware. Some services offer this included with the price (or a limited version of it), Sling TV as standard doesn’t. For those looking for Cloud DVR that benefit comes at an additional $5 per month charge on top of the existing plan charge.

The cloud DVR price is the same regardless of whether you sign up to Orange or Blue.

Although the Sling TV channel lineup is a bit limited (regardless of which plan you opt for) you can customize the experience greatly by adding entire genre and category packs to a plan. These “Extra” packs are available for Sports, Comedy, News, Kids, Hollywood and Lifestyle.

Most of these vary between $5 and $10 per month although there are instances where you can save more when bundling the packs. For example, Sling TV offers a “4 Extras” deal which provides access to the Kids, Comedy, News and Lifestyle packs for an all-inclusive $10 per month charge – compared to $20 extra per month if subscribing to each pack individually.

In addition, Sling TV is one of the best options when it comes to international language and content with specific packs available, including South American, Central American, Mexican, Spanish, Chinese, Hindi, French, German, Italian, Polish, Arabic, and more.

Sling TV also offers the option to add premium networks to your monthly plan. These are available for EPIX ($5 per month), SHOWTIME ($10 per month) and Starz $9 per month). This is in addition to some specific sports-focused packages, such as NBA League Pass or if you just want to follow one team then the NBA Team Pass.

Without a shadow of a doubt Sling TV is one of most customizable options and this means it will be a solid solution for a number of different users. Having the option to almost a la carte choose your channels, and only pay for those channel selections, is a big positive for consumers.

However, this might not be an ideal option for those looking for a more fuller live TV streaming solution. Yes, you can continually add channels but the price starts to increase rapidly and that’s before you then add on additional feature such as cloud DVR. At that point, the difference between Sling TV and other competing services becomes smaller and less easy to recommend.

One of the other main points to consider is the availability of international content. Sling TV makes it really easy to add specific regional content and if that’s something you might be interested in, then this is likely to be a better option for you than others.

Of course, if you are simply looking for the cheapest solution overall, then at $25 for basic access and channel selection, Sling TV is worth checking out.

Whichever plan best suits your needs, Sling TV does offer a free trial. This is only a seven-day trial so you won’t get a lot of time to decide whether this service is the right service for you.

A credit card is required to take advantage of the trial and automatic billing is in effect so once the seven-day period has expired the user will be billed immediately for the month ahead and at the rate associated with the plan (plus add-ons) chosen during the trial period unless changed.

Considering this is a no-commitment trial period you are free to cancel at any point during the trial period to avoid automatic billing, while retaining access to the service and all of the content for the duration of the trial period.