If you’re jumping into the “cutting the cord” trend when it comes to your live TV streaming experience, Sling TV is one of the most affordable options. It’s less expensive than traditional satellite and cable subscriptions, without the hassles of monthly billings and hard-to-cancel subscription plans. Sling TV’s service enables subscribers to stream a plethora of popular and live TV channels on their smartphones, tablets, computers, and TVs. Know more about this streaming service in this guide.

What Is Sling TV? 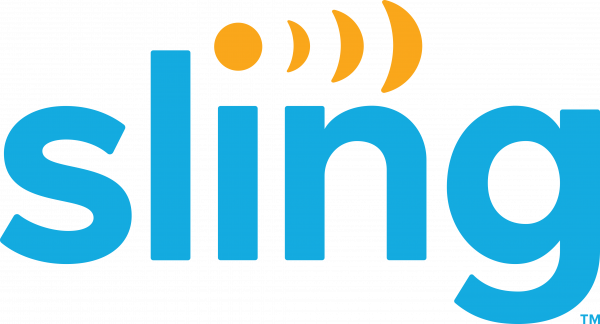 The Dish Network-owned company offers live streaming entertainment through your internet. With an à la carte basis for channel selection, Sling TV provides customers with the opportunity to register for individual channels. It is similar to having a satellite or cable TV subscription. However, the sole difference is that you’re using the internet to watch your favorite channels instead of a traditional cable box. To start steaming, you simply connect a game console, a streaming device, or the Sling TV app to your preferred device to watch.

Despite the many competitors, Sling TV is still the frontrunner when it comes to affordable cord-cutting live streaming service. Users can choose from two subscription plans; namely, Sling Blue and Sling Orange, which will be discussed further in this article. 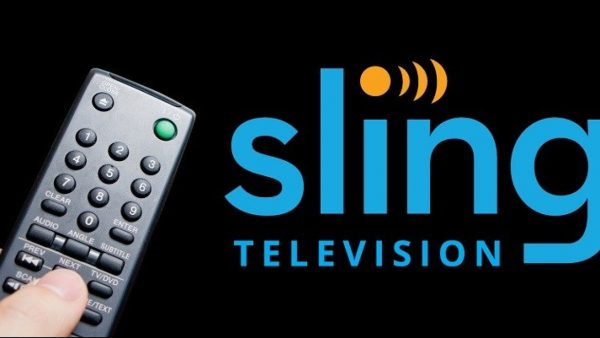 Although operated by Dish Network, Sling TV doesn’t require a Dish subscription to enjoy the streaming service. Also, it is compatible with almost all major platforms including Roku, Android, and iOS.

For Sling TV to work, you should have a stable and active internet connection of a minimum of 5 Mbps. However, it’s highly recommended to have 25 Mbps or higher. Sling TV replaces your traditional cable box, antenna, or satellite dish with modern devices such as Smart HDTVs and gaming consoles.

Furthermore, there is no agreement, contracts, and cancellation fee to it. Thus, you can cancel or resume your Sling TV subscription without hidden fees or penalties. Also for Sling TV’s Orange subscription, you can only watch one stream at a time, while the Blue subscription provides you with three streams at a time. If you’re wondering what it’s like to have the cloud DVR, then it’s Sling TV gives you a similar experience by mimicking traditional satellite devices or cable’s actual digital video recorder box. It enables streamers to play and record TV shows and skip ads on specific channels. All monthly subscriptions from Sling TV include 10 hours of cloud DVR service. Also, you can pay an extra for $5 per month for additional storage of 50 hours.

For on-demand shows, the majority of channels on Sling TV allows you to watch these shows instantly. They feature “Three Day Replay” so you can watch any TV show that aired within three previous days. What’s more, some channels even provide you with the opportunity to re-watch any movie or TV show within the past seven days.

$30 per month: it includes 33 channels with Disney and ESPN included but not NBC and Fox channels. Subscribers can stream one at a time.

$30 per month: it includes 48 channels with NBC and Fox channels included but not limited to Disney and ESPN channels. Subscribers can stream three at a time.

$45 per month: all channels are included. Streaming is up to four at a time except for Sling Orange. It only supports one channel at a time in terms of simultaneous streaming.

To get started, first, you should have a subscription to Sling by creating an account. Once you already have an active subscription, then you’ll need to download and install the Sling TV app to a compatible iOS or Android device. After you’ve finished the setup, you can finally sign in and start streaming your favorite channels anywhere in the U.S. Regardless if you’re using mobile data, wired, or Wi-Fi connection, you can easily stream on Sling TV.

How the Channels Work

Similar to traditional TV channels, Sling TV has national advertisements and commercial breaks. For a number of on-demand content, some ads can’t be paused or skipped. Also in terms of skipping and pausing on Sling TV, it comes with an extra subscription for cloud DVR.

On selected channels, the fast-forward, rewind, and pause functions work normally. Thus, you can pause your favorite movie and rewind it to your favorite scenes. Also, you can fast-forward to catch up and for both functions, it’s only possible through Sling TV’s cloud DVR. 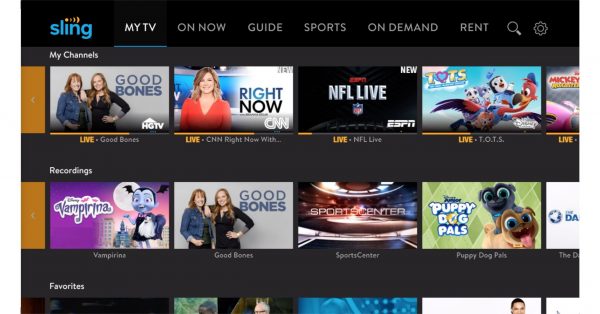 Since its launch, Sling TV doesn’t have any major updates when it comes to revamping its interface. Here are the major sections you need to be familiar with.

Once you open the Sling TV app, you’ll initially see the My TV main panel. The My TV screen is categorized into My Channels, Recordings, Favorites, Hit Movies, Top News, and Recommended For You. Aside from that, the top navigation includes On Now, Guide, Sports, On Demand, and Rent.

For genre-specific streaming, you can click on On Now for choosing live TV channels that are categorized according to different genres, including Comedy, Action and Adventure, Lifestyle, and Kids.

Sling TV’s popular navigation is the Guide panel. It is a cable-like grid that consists of networks listed in a vertical position with horizontal schedules. The downside of this panel is that the names of the networks aren’t listed in alphabetical order, thus finding your favorite channels are a bit challenging and daunting.

Next to Guide, the Sports panel is categorized according to the type of sports such as Obscure Sports, eSports, Combat Sports, and Basketball.

For some specific devices and web version of Sling TV, a Rental panel is available. Similar to Apple TV and Amazon Prime Video, you can rent out your favorite movies. In general, you can rent out newly-released movies starting at $5.99.

Lastly, Sling TV has nice search functionality. As you input your search query, Sling TV will provide you with a list of the most popular search results happening at the time of input. Once you’ve selected what you’ve searched for, Sling TV will organize the results into a new set of categories such as channels, TV shows, movies, and popular results. While it’s not as robust and ultra-fast as YouTube, it works well.

After clicking on your preferred search result, it will pop up a window that provides you with information regarding cast listing and synopsis. Regardless if the TV is airing live or not, subscribers can either record or watch.

Sling TV has two main subscriptions: Sling Orange and Sling Blue. Both subscriptions deliver more than 30 channels costing $30 per month. For the majority of channels, they mainly overlap between the Orange and Blue subscriptions; however, there are minor differences that might affect your preferences.

On the contrary, Sling TV’s Orange package doesn’t include any local channels. Thus, if you’re a fan of watching the local news, the Sling Blue package is your perfect option.

If you’re watching the latest episodes of any series on Fox channels but don’t want to miss out on ESPN’s basketball streams, you can purchase a combination of Sling Blue and Sling Orange. You will pay $45 per month and you will get more than 50 channels from the two Sling TV packages.

Here is a comprehensive list of all Sling TV channels that you can stream on either a Sling Blue or Sling Orange subscription:

Aside from the base channels from Sling TV’s basic packages, the service also offers additional packages through Sling Extras. To choose additional channels, you must be a subscriber to either Sling Orange or Sling Blue and pay an extra fee per month. Some of the channels are limited to either Blue or Orange subscribers.

Here are the extra packages you can avail through Sling Extras:

In terms of video quality, Sling TV doesn’t have the same quality as that of cable or satellite service. In some independent testing, Sling TV’s video quality is somewhat similar to Verizon’s Fios HD. When transitioning to a new channel, Sling TV has occasional picture drops. However, on higher-quality internet connection and speed, the platform delivers excellent picture stability and high-quality images. For smaller devices, video quality is also equally good.

Depending on the device you’re streaming, Sling TV has designated the recommended internet speed. That said, if you’re streaming on a mobile device such as an iPad or iPhone, a minimum of 3 Mbps is recommended for good picture quality. When you’re using Sling TV’s desktop version or on TV, you should have at least 5 Mbps.

To get the best and most stable streaming quality, Sling TV recommends a minimum of 25 Mbps for your internet connection’s speed.

With Sling TV, you can watch your favorite TV shows, movies, and channels on your mobile device, computer, or tablet anywhere anytime. If you’ll just use it for your home entertainment in the living room, Sling TV got you covered.

In terms of customer service experience, subscribers have a one-stop shop for all their concerns through Sling TV’s website. However, the majority of inquiries are directed through help.sling.com for easier tracking. Some of the most common customer service concerns about the service include starting a new subscription, billing concerns, changing or cancellation of service, troubleshooting, and inquiries about Sling TV’s packages.

As a best practice, customers should ensure they’re calling the right hotline number. Sling TV has a separate contact number for new clients who want to start their subscription plans. For existing Sling TV subscribers, Sling TV instructs you to visit its customer support page. You need to accomplish a few questions before you’ll generate a customer support reference number.

For billing concerns about Sling TV, ensure that you have your debit or credit statement come in handy. For tech support, you should be near your mobile device or television so you can work together while troubleshooting.

Sling TV comes with a set of limitations. That said, it might not be the perfect live streaming alternative for everyone. It’s especially true if a subscriber is having more than 100 channels on TV. But, for Sling TV’s price of $30 per month for a basic subscription, it’s still a worthy investment for many subscribers. With no cancellation fees, commitments, and contract agreements, Sling TV is an ideal live TV subscription-based service, especially if you’re tired of your dangling cables in your entertainment room. Although there are cheaper options such as WatchTV and Philo, costing $15 and $20 per month respectively, they don’t include locals and sports channels.

Sling TV comes with a free trial. With that, we recommend listing down all the channels you need and frequently watch. Once you’ve listed them down, you can verify how many of those channels are included in Sling TV’s subscription plans.  You can watch or shop around Sling TV’s live streaming service before saying goodbye to your old satellite TV or cable service provider.

2020-12-18
Previous Post: Where can I watch Korean dramas online legally?
Next Post: How Does Sling TV Work?