Sling TV would be great if it wasn’t so chintzy

Of all the live TV streaming services that want to replace your cable bundle, Sling TV is the one I’d love to recommend most.

While other services have larded on more mandatory channels—and raised prices accordingly—Sling TV has tried to preserve some semblance of cost control with its lower base prices and add-on packages. Unlike its rivals, Sling TV has also embraced over-the-air antennas, selling hardware that integrates free broadcasts and streaming cable channels in a single menu. It’s the rare live TV service that seems to be fighting the homogenous, bloated bundles that cable subscribers are trying to escape.

That’s why Sling TV’s shortcomings are so frustrating. The service, which is owned by satellite TV giant Dish Network, has always struggled provide a smooth, consistent experience across all streaming devices, and it’s been slow to adopt new features that might help it stand out for reasons beyond pricing and packaging. Perhaps that explains why, after building up a huge first-mover lead in subscribers, Sling’s growth has nearly ground to a halt.

Consider this column an act of tough love. For Sling TV to be truly great, it needs to take decisive action in a few key areas:

A better plan for local channels

At a base price of $25 per month, Sling TV is about half the cost of other streaming services that carry live sports. Sling accomplishes this partly by offering two base packages—one anchored by ESPN channels, the other with NBC Sports, Fox Sports, and regional sports—but it also keeps prices down by limiting its local broadcast coverage.

Sling TV only carries local feeds for both Fox and NBC in seven U.S. markets, and it only carries one or the other in 14 additional markets. The service hasn’t added any local Fox or NBC stations that aren’t owned and operated by the networks themselves, and it doesn’t carry ABC or CBS stations at all. By comparison, other live TV services have been racing towards complete local channel coverage. YouTube TV, for instance, now has live local feeds from all four major broadcast networks in 90 percent of U.S. markets, and has at least three out of four in the remaining 10 percent.

Sling president Warren Schlichting said last year that local channels currently account for about $12 per month of the average pay TV bill, so carrying more of them would wipe out much of the service’s price advantage. Still, Sling TV could do better at employing workarounds.

Mentioned in this article

Dish doesn’t seem fully committed, for instance, to its AirTV group, whose hardware adds over-the-air channels from an antenna to the Sling TV app. The AirTV Player is more than two years old, runs an outdated version of Android TV, and doesn’t support HDR video. The AirTV box, which streams broadcasts to the Sling app on other devices such as Roku, has been out for more than a year, but still doesn’t integrate with the Sling app on Apple TV, Chromecast, Xbox One, smart TVs, or the web. It also lacks some of the features you get with other over-the-air DVRs, such as 5.1 surround sound, ad-skipping, and program search. If Sling won’t provide full local channel coverage, it should make antenna integration a bigger priority. 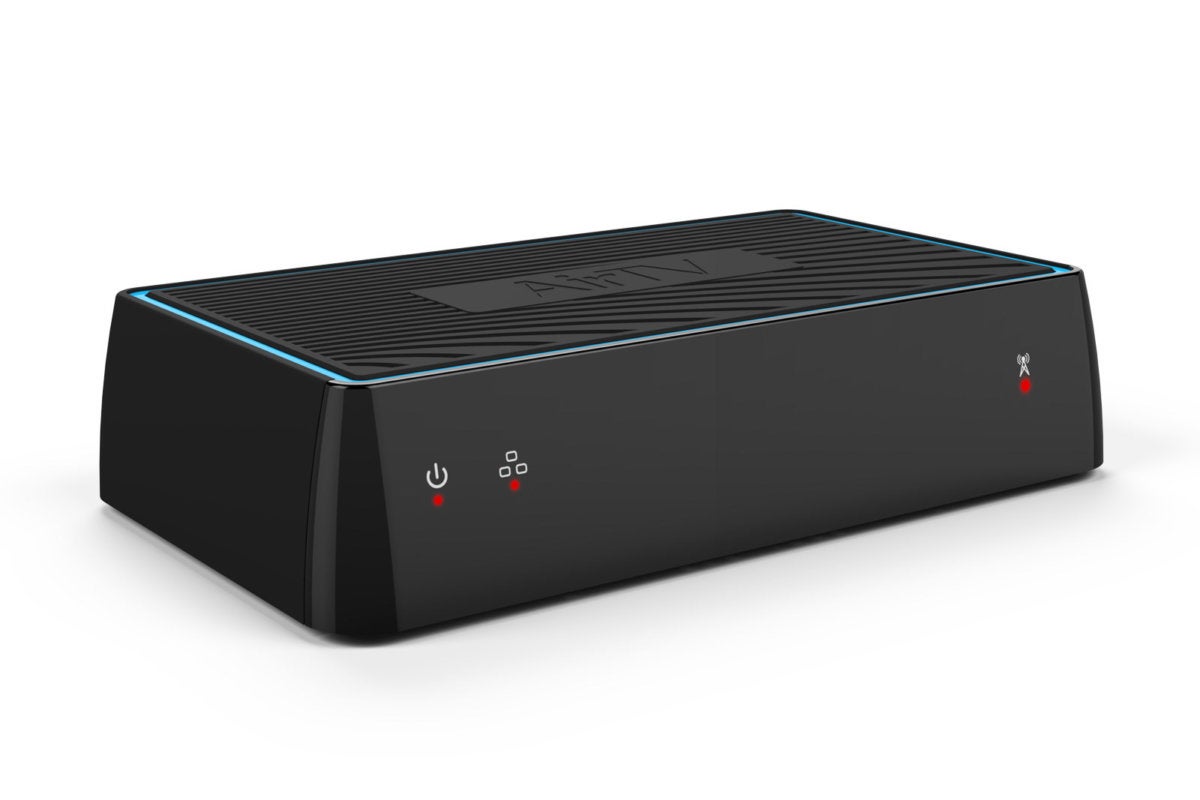 AirTV can stream broadcast channels into the Sling app, but device support is limited.

For folks who can’t get solid antenna reception, Sling could also take a page from AT&T, which last month donated $500,000 donation to Locast. a non-profit that streams local channels for free in 13 U.S. cities. AT&T is now integrating Locast streams directly into its DirecTV and U-Verse TV services, and could perhaps use the service as leverage against rising local channel prices in the future. It’s not hard to imagine Dish doing something similar for both its satellite and streaming customers.

Video quality has always been a sticking point for Sling TV, as the service only supports 60-frames-per-second video on certain sports channels. If you want to watch soccer via Bein Sports, reality shows on HGTV, or cable news on CNN or MSNBC, the video will look choppier than it does on cable. The aforementioned AirTV box also caps frame rates at 30 frames per second, so if you’re tying in channels from an antenna, you won’t get anything close to native broadcast quality.

While lower frame rates might have been acceptable when Sling TV first launched in 2015, it’s since become a major weak spot compared to other streaming services. YouTube TV, DirecTV Now, PlayStation Vue, and Hulu with Live TV all support 60 frames per second on all channels. For whatever reason, Sling TV just isn’t making those higher-quality streams a priority, and it makes the service look cheap to anyone who can tell the difference.

What got me thinking about all this to begin with was Sling’s announcement this week of software updates on Apple TV and Roku. Most notably, the Apple TV app now shows an image preview and episode description when you scroll through items on the home screen. It also improves the search function with separate sections for top results, movies, TV shows, and channels. 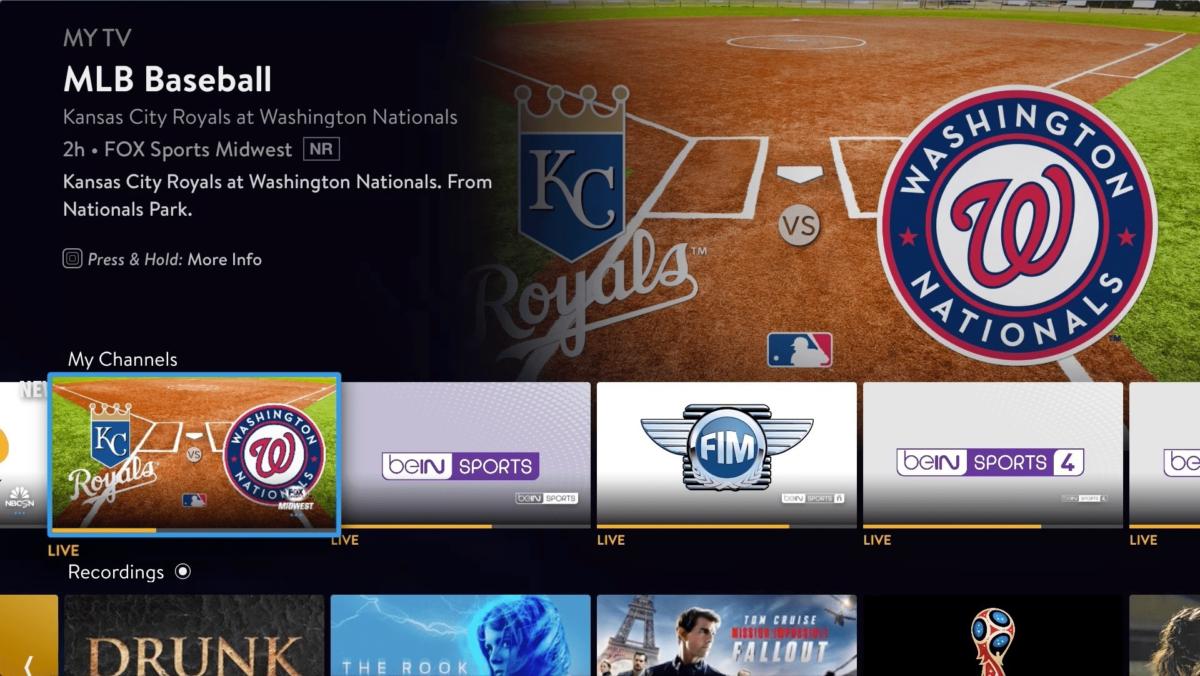 Those are nice improvements, but as with so many other Sling TV features over the years—including cloud DVR and previous interface updates—it’s unclear when the interface refresh will roll out to other platforms, such as Roku and Fire TV. For now, their home screens require a lot more clicking around to get program information and to start watching. The lack of consistency is a problem if you use Sling on more than one streaming platform. 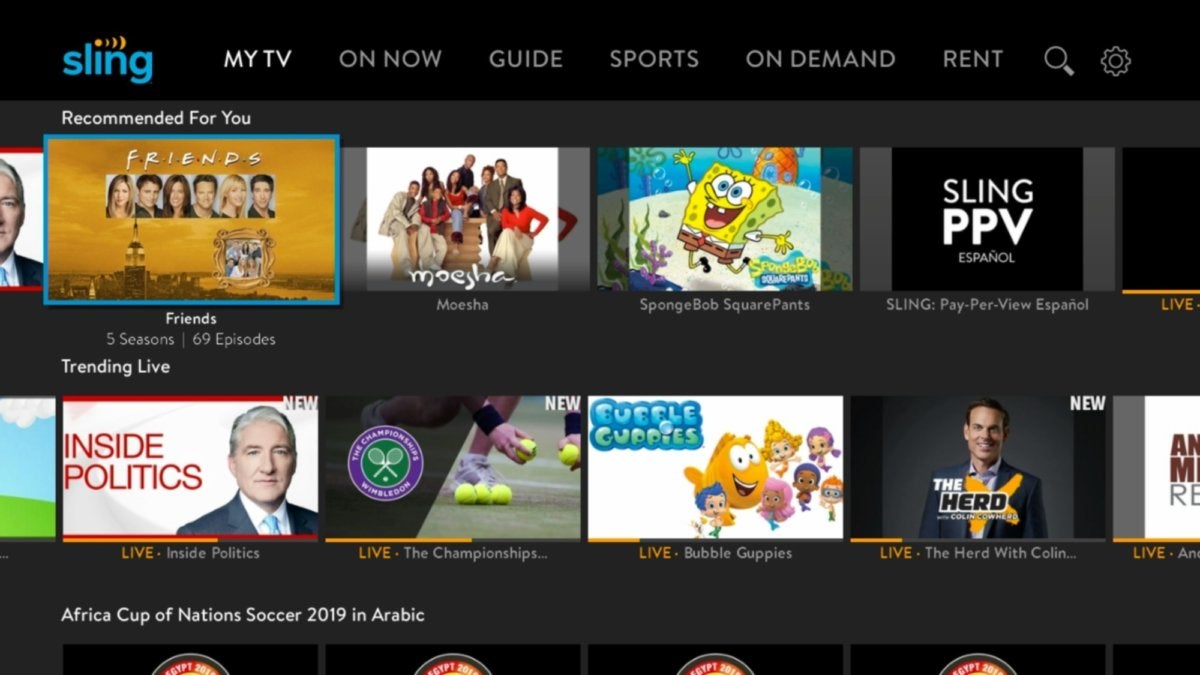 … But other platforms such as Roku look a lot different.

Meanwhile, Sling has done little to integrate with different streaming platforms on any deeper level. You can’t launch Sling channels by voice with Alexa on Fire TV devices, or with Siri on Apple TV devices, and Sling doesn’t tie into the home screen on Fire TV or the TV app on Apple TV. PlayStation Vue, Hulu with Live TV, DirecTV Now, FuboTV, and Philo have all done a better job supporting these platform-specific features.

Sling TV’s position among live TV streaming services is increasingly unique thanks to its more flexible channel packages and ability to tie in an antenna for free local channels, but it’s always been held back by a sluggish pace of development. With a little more commitment to slicker apps, better video quality, and local channel integration, it could really be something special.

Sign up for Jared’s Cord Cutter Weekly newsletter to get this column and other cord-cutting news, insights, and deals delivered to your inbox.

Note: When you purchase something after clicking links in our articles, we may earn a small commission. Read our affiliate link policy for more details.