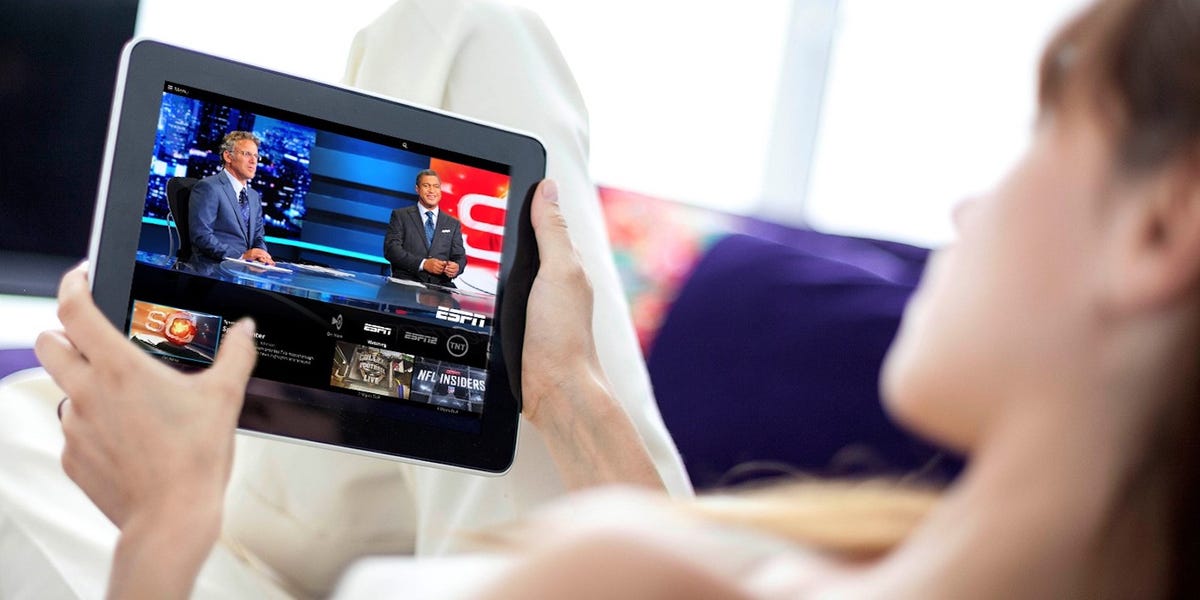 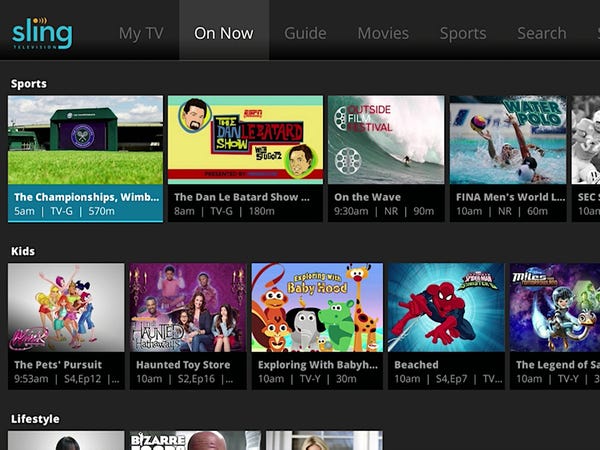 Cable TV is on the way out. Gone are the days when having a decent TV channel and show selection meant spending big on a cable subscription from one of the main companies. These days, you can enjoy movies and TV shows with Netflix, Disney Plus, Hulu, Amazon Prime, or any number of other streaming services.

But what about live TV? Live TV is great for watching your favorite network shows as soon as they’re available, watching live sports, or simply channel surfing if you don’t quite know what to watch.

Thankfully, cutting out the cable company doesn’t necessarily mean having to ditch live TV altogether. In fact, there are great services out there for streaming live TV to your Apple TV, Android TV, Roku, or other streaming device. One of the most affordable live TV options is Sling TV.

Sling TV offers a large selection of channels and allows you to keep the live component you might have enjoyed from a traditional TV service without keeping your pricey cable subscription. Interested? Here’s everything you need to know about Sling TV.

What exactly is Sling TV?

Sling TV is essentially a way to watch your favorite live channels without a cable subscription. Basically, instead of channels making their way to your TV through lines from a cable company, the video is streamed to your TV or streaming box through the internet — just like other streaming services like Netflix.

There are a few advantages to this system. For starters, you’re not limited to watching content on your TV. You can watch on your TV, laptop, phone, or tablet just as easily with the Sling TV app.

It also makes recording content a little easier. DVR features beyond the included 10 hours do cost $5 extra each month, but the trade-off is that you’ll get 50 hours of recording time, and you’ll be able to catch up on your favorite TV shows and movies when it’s convenient for you.

How much does Sling TV cost, and which channels will I get? 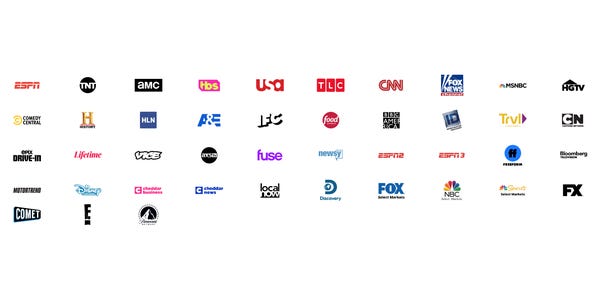 While your cable subscription could run into the multi-hundreds of dollars per month, Sling TV is far cheaper, starting at a regular price of $30 per month after a discounted introductory rate of $20 for your first month. New members can also take advantage of a free seven-day trial.

When signing up for Sling TV, there are a few packages to choose from. The entry-level $30/month Sling TV Orange service gives you access to 32 different channels, including CNN, AMC, A&E, Cartoon Network, ESPN, Disney Channel, and more.

Sling Blue, which also costs $30 a month, has 47 channels, some of which are the same and some of which are different. Notable inclusions are National Geographic, NFL Network, Fox Sports, and BBC America, as well as local Fox and NBC stations in select markets. Despite having more channels overall, however, Sling Blue does not include the ESPN or Disney networks that Orange features. Sling Blue is now available to try for free for seven days.

There’s a third plan, too. If both Sling Orange and Sling Blue offer something that you’re interested in, then you can get a package that comes with all the channels from both for $45 per month.

There are add-ons for Sling TV, too, most of which are relatively inexpensive. As mentioned, you can add 50 hours of Cloud DVR services for $5 per month. There’s also a “Sports Extra” add-on that’s $10 per month, and includes ESPNU, ESPNews, NHL Network, and NBA TV. Parents with young children can get a Kids add-on for $5 per month that offers Disney Junior, Disney XD, and more. You can also add premium networks like Showtime and Starz for an extra $9 to $10 a month.

You can check out a full list of the channels available on Sling TV here.

Free-to-air local channels are compatible with Sling TV, too. If you have an over-the-air antenna, a way to connect it to your setup, and live in a supported area, you can incorporate those channels straight into the Sling TV interface.

Channel availability isn’t the only difference between Sling Orange and Sling Blue. With Sling Orange, you can only watch on one screen at a time — while on Sling Blue, you can watch on up to three. That makes Sling Blue arguably a better fit for families, in which different people might be watching on a different screen at the same time.

Where can I watch Sling TV? 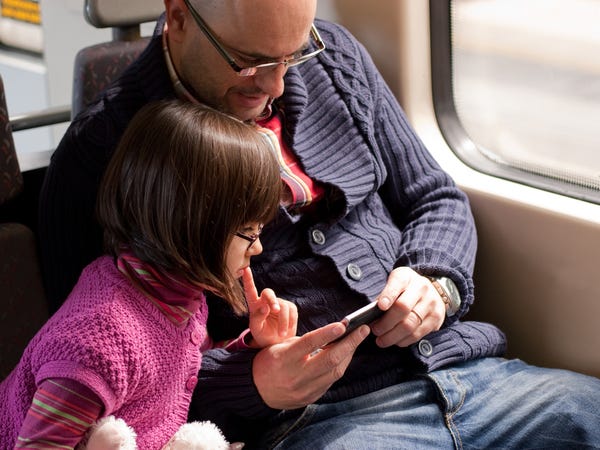 Sling TV is available on a variety of mobile devices, media players, and smart TVs. Shutterstock

One of the great things about Sling TV versus your traditional cable subscription is that you can watch your TV pretty much anywhere you have access to a digital device and internet. There are Sling TV apps available on both Android and iOS, so your phone and tablet supports it. There are also apps for the Apple TV, Fire TV, and Android TV, as well as Roku, Xbox One, and smart TV platforms from Samsung and LG. Safe to say, if you have a connected media device of some type, you should be able to get Sling TV on your setup.

Are there any limitations to Sling TV?

Another limitation is that local stations, like Fox and NBC, are only available in supported areas — and while those areas cover most people in the US, if you don’t live in or near a major city you may not get local programming.

What about on-demand video? 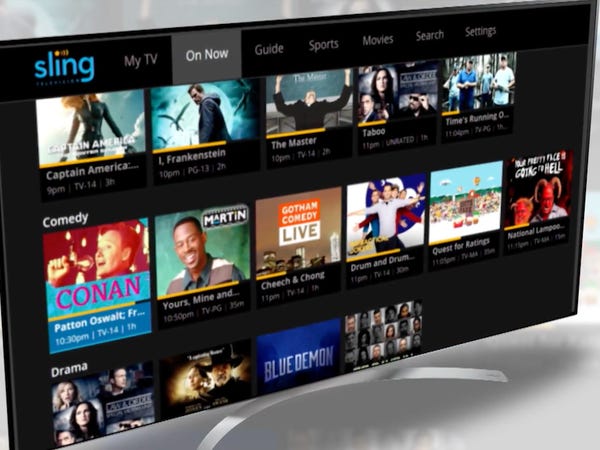 Sling TV is mainly for live TV, but there’s a selection of on-demand video you can watch, too, straight through the “Available Now” section. The content in that section, however, changes relatively frequently. That’s because of the fact that the on-demand selection isn’t determined by Sling. It’s Sling’s channel partners that opt to offer their own content on-demand.

Sling TV is a great way to enjoy live TV without being beholden to a cable company and without having to pay an arm and a leg for a cable package. It also allows you to enjoy TV anywhere as long as you have an internet connection, so if you find yourself bored on public transportation a lot, then it may be worth buying for you. You can sign up to Sling TV for yourself straight from the Sling TV website.