Super Channel is suing retailers, customers over TV boxes and 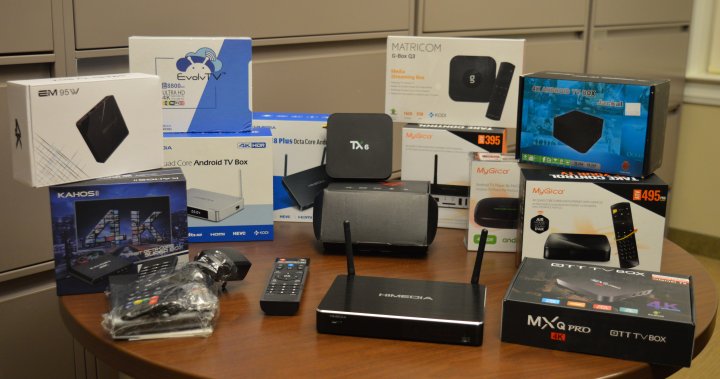 Canadians who bought Android TV boxes from four big-box retailers are among the groups of defendants named in a copyright lawsuit that raises questions about how streaming technology is changing the nature of piracy.

The lawsuit comes from Allarco Entertainment 2008, owner of premium network Super Channel, and centres around so-called “pirate devices” that enable customers to view paid TV programming online for free, according to court documents.

McDonald says the lawsuit is designed to target what Super Channel considers to be a “culture” of content piracy.

In documents filed in the Court of Queen’s Bench of Alberta, the company says it has suffered “substantial damages” as consumers illegally access content to which Super Channel has the rights in Canada.

Named as defendants in court documents are four of Canada’s largest tech retailers — Staples Canada, Best Buy Canada, London Drugs, and Canada Computers, as well as the suppliers and manufacturers of the devices, as well as so-called “John Doe Customers” who bought the devices from the big-box stores.

In an effort to drive sales, staff and management at the four retailers are “advising,” “educating” and “encouraging” customers to use the devices to “steal” copyrighted material, the lawsuit alleges.

Super Channel is also demanding that the retailers reveal the identity of customers who bought the TV boxes.

The case is part of a recent trend of copyright lawsuits that are targeting end-users.

Super Channel is suing after what it described as an 18-month operation in which the company says it sent company investigators acting as secret shoppers to various Staples, Best Buy, London Drugs and Canada Computers locations across the country, buying approximately 150 of the devices.

The network has submitted in court more than 100 hours of undercover audio and video evidence in which it claims store staff are recorded encouraging customers to watch pirated movies and TV shows and offering instructions on how to do so.

In one video clip that Super Channel says was recorded at a Best Buy in Barrie, Ont., a man who appears to be a salesperson says:

In another clip allegedly recorded at a Staples in Langley, B.C., an alleged store employee can be heard saying:

“You just go online in search of the movie and they give you a bunch of links to watch it. … It’s illegal.”

In another clip that Super Channel claims was taken at a London Drugs store in New Westminster, B.C., a man who appears to be a salesperson says:

“Essentially, you’re finding methods in ways of stealing the content.”

Super Channel did not share videos it says it has featuring Canada Computers stores.

In the lawsuit, the company alleges the retailers are “advising their Customers how to avoid detection of their pirating activities,” adding that in some instances they are showing pirate programming to customers in store.

In some of the clips seen by Global News, a Super Channel investigator posing as a customer inquires about how to stream movies that are still in the theatres. On a couple of occasions, for example, the secret shopper is heard wondering about how others were able to watch Jurassic World on their TV just days after its release on the big screen.

In an interview with Global News, McDonald defended those questions.

“The proper training a store person should have is to say, ‘Well, that … would be pirating that content and there’s nothing I can help you with,” McDonald said.

None of the undercover videos show actual customers, McDonald said.

Super Channel said it sent the four retailers cease and desist letters before proceeding with court action. Now, the company is seeking an injunction prohibiting the stores from selling the devices as well as $50 million in damages.

“We offer technology from reputable manufacturers and leading brands. We take claims of intellectual property infringement seriously, but we believe that Super Channel’s claims are without merit, and intend to defend this action vigorously,” Best Buy said via email.

“We dispute Super Channel’s allegations and will vigorously defend against them,” London Drugs said.

“London Drugs has always respected the rights of content creators and holders of copyright in all forms. We sell products and provide services for many parties engaged in content creation and distribution and recognize and fully support their right to fair compensation.”

Staples declined to comment on matters that are before the courts.

Canada Computers did not respond to multiple requests for comment via phone and email.

Super Channel wants consumers held responsible as well. Store customers, along with retailers and suppliers, have “intentionally interfered with the economic and business relations of the Plaintiff,” the lawsuit reads.

McDonald’s affidavit says entire seasons of TV series like The Oath and comedy series Swedish Dicks, to which Super Channel owns the rights in Canada, were available to be viewed on the devices before the company was permitted by its licence to show them to its own customers.

By naming unidentified customers as defendants, Super Channel is hoping to “change the culture of content piracy,” McDonald said.

“Most people understand that in order to acquire content, you have to pay for it,“ he added.

“Canadians should be concerned because they may get dragged into litigation. They may have their privacy invaded.”

The Super Channel lawsuit is part of “a trend of a number of lawsuits that are going on in Canada, the United States, to basically rein in the internet,” added Knopf, who is counsel with Macera and Jarzyna in Ottawa and has represented some of the retailers in unrelated cases.

A new chapter in the piracy wars

At the core of the Super Channel lawsuit is the question of whether devices like Android boxes are, in fact, primarily meant for illegal use.

“These devices are essentially media streamers. There’s nothing inherent about them that makes them into a pirating device,” said Williams, who is chief strategy officer at Blink, a Vancouver-based digital creative agency.

The boxes look similar to an Apple TV or Roku device but usually run the Android operating system, which is better known for its use on touchscreen mobile devices like smartphones and tablets. The devices can run any number of apps and software, including a piece of free open-source software known as Kodi.

Kodi allows users to stream content like photos, music and movies across devices using the internet. Williams, for example, said he uses Kodi to play his collection of 900 DVDs that he had ripped to a hard drive.

But Kodi, “is pretty much agnostic as to the type of content that it’s streaming,” he said. The software “sees a video file as a video file, whether it’s on your home network or whether it’s been made available for streaming online.”

The software also doesn’t distinguish between legal and pirated content. This can make it hard for consumers to tell the difference as well, Williams said.

“You purchase one of these boxes, you get at home, you click on a movie and you don’t know whether it’s somebody who’s breaking the law to provide it to you or a legal copyright holder,” he said.

McDonald, however, believes most consumers know better. People understand “darn well” that when they’re watching an episode of HBO’s Game of Thrones for free, it’s not legal, he said.

Super Channel argues the main draw of streaming devices that are sold pre-loaded with Kodi software is to enable consumers to illegally watch paid programming for free.

The U.S. non-profit behind Kodi, XBMC Foundation, said the software does not provide any support for bootleg video content.

“We make a basic tool which is highly flexible and effective. Other people including some software developers misuse it by adding to it and encouraging users to perform unlawful activities. We at Kodi have never authorized these and condemn such usage,” the foundation said via email through its legal representatives at the Software Freedom Law Center.

“We have worked in cooperation with media companies on such matters to check illegal activities and we will continue to do so,” the foundation also said.

Google, which developed the Android mobile operating system, did not respond to a request for comment.

For his part, Knopf, the copyright lawyer, links lawsuits like Super Channel’s to Hollywood’s attempted legal crackdown on the VCR in the mid-1980s.

When households started to tape movies and shows that aired on TV, the studios argued “the VCR was to the entertainment industry what the Boston Strangler was to the woman alone,” Knopf recalled.

Eventually, though, Hollywood figured it could make billions off the VCR by renting cassettes at affordable prices, he added.

Something similar happened when Netflix and other streaming services started to make premium content available at low cost, which killed the allure of torrent sites that share pirate content.

But as the number of paid streaming services multiplies, with the arrival of platforms like Disney+ and Apple TV Plus, so do the monthly fees consumers must pay to access popular movies and shows.

This may be increasing the appeal of open-source TV boxes that offer the ability to access movies and TV shows at no other cost other than the initial purchase of the devices, many of which sell for less than $150 in Canada.

Wait, There’s More: Are the streaming wars a win for consumers?

“If we go to this splintered world again, where content is less accessible — maybe available online, but expensive — and not on platforms that consumers actually want to use, then we’re going to see a resurgence in piracy,” said David Fewer, an intellectual property and technology lawyer.

But there are a couple of twists in what looks like a new chapter in the war on piracy.

The first is that, according to Fewer, it’s now easier to unintentionally consume pirated content. In the past, consumers had to put in a cassette and press the record button or navigate to the dark corners of the web to download pirated material. Now, they can access illicit content on TV boxes sold by mainstream retailers.

It’s not always obvious which apps and plugins search the internet for pirated content, said Fewer, who serves as executive director of the Samuel-Glushko Canadian Internet Policy and Public Interest Clinic at the University of Ottawa.

The second twist is that simply watching content does not, in itself, break the law in Canada — even if the content was obtained or distributed illegally.

“You’re not making a copy, downloading anything. You’re just streaming it, you’re watching it, you’re experiencing it,” Fewer said.

Both Fewer and Knopf expressed doubts about whether Super Channel will be able to successfully make the case in court that TV boxes with open-source software are, in fact, “pirate devices.” They also questioned whether the company will be able to go after consumers who bought the devices.

Super Channel has withdrawn a similar lawsuit it initially filed in federal court, deciding instead to resubmit the case in Alberta.

“And that’s not good for anybody.”

2020-12-18
Previous Post: Sling TV packages and price: see the cost of the
Next Post: Is streaming video from sketchy websites illegal?